Peaceful Coexistance: There is no Other Way 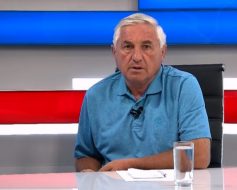 A Talk at the Factor TV

– Mr. Bleyan, according to a survey by the International Republican Institute, 62% of Armenians consider the solution of security issues a priority, assessing the situation as very worrying. In addition to arming the army, one of the ways to reduce the external threat is to establish peace with neighboring states. In your opinion, isn’t this an impossible idea today, especially when Azerbaijan continues its hostile policy towards Armenia and Artsakh, there are shootings on the borders in the direction of peaceful settlements, they provoke fires, in the end, the captives are not returned. Doesn’t the discourse close here?

I don’t think that the same 62%, any man living in Armenia, for example me, thinks that he and his grandchildren, the students of the EduComplex, will continue living in Armenia, moreover, sees any perspectives here. We should state that we have no other place to go to. Coexistence with Turks and Azeris is something not to be discussed. It should be realized and stated. Can there be any security without it? I have taken the title of one of my articles from Arpiar Arpiaryan: “The land full of dangers can’t be a homeland for Armenians.” It means that if our region, our country Armenia with Artsakh can’t become a safe and secure place, there sure to be emigration. An insecure land can’t be a homeland. They will speak about staying in Armenia in live shows, and meanwhile, they have already planned the emigration of their children. This should be kept in mind. On the other hand, we are speaking about living properly in the Republic of Armenia.

-How do you ensure the solution of the problem of restoring the safe environment?
-We should realize that this is the most difficult work, and that is the only work that may unite us. Everyone here has to go through what has happened since 1988, not to mention the lessons of the First Republic in 1918-1920, but the most important thing is that since 1988, the storm, the turmoil, the exclusion of the tragedy of war, when the main goal was not the establishment of peaceful coexistence. Wherever you are, in the USA, in Armenia, or in Russia, whatever your status is, you have only one consolation that is to find a way of your participation in the establishment of this coexistence. Yes, now you have to impose that peaceful coexistence on the Azerbaijanis.

-The most important, perhaps, is the following question: how to impose peace on a state like Azerbaijan with its ambitions and behavior

-How to do it is a matter of tools but let’s first formulate the goal. We should know that it will be difficult for a long period of time but that doesn’t mean that there is any other way besides establishing coexistence. It does not mean that it is possible to redraw the borders. It means that you just have to predict the opposite. If you do not establish coexistence, if you do not have that much ability ․․․ For example, what are our compatriots doing in the world, in the USA, Russia, and France? They must understand that an exceptional dialogue must be started.

–Your proposal could have worked in ideal conditions, but in the person of the Azerbaijanis, we are dealing with a country where the level of anti-Armenianism is very high. We have also characterized Azeris and Turks, but it has had a mostly defensive function. Do you see the other side as ready to push forward the necessity of the dialogue?

– I will always say that it must be imposed. Imposing does not necessarily mean imposing with a weapon, but with persistent and firm negotiations. The world should see that Armenians can lose with dignity, which means we can come to our senses, do research, do painful research in our actions and behavior.

The interview was conducted by Robert Ananyan